Will Play Wimbledon if I Don’t Need Injections 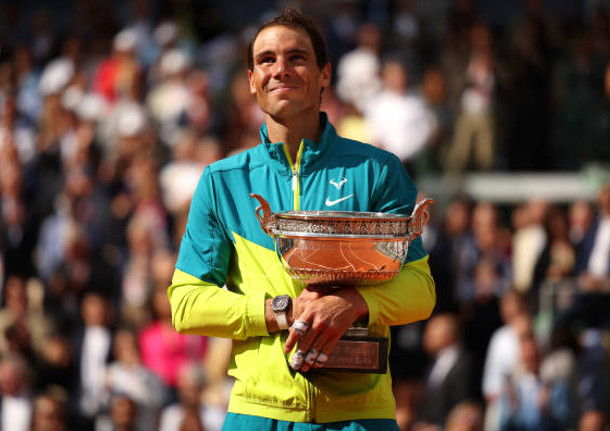 Rafael Nadal will continue his quest for the calendar Grand Slam at Wimbledon—as long as he doesn’t need pain injections to play.

Two-time Wimbledon winner Nadal says he will play Wimbledon if his chronic left foot injury permits him to play taking anti-inflammatories instead of pain-killing injections, which he took to play Roland Garos.

“Wimbledon is a priority, always have been a priority,” Nadal told the media in Paris. “If I am able to play with anti-inflammatories, yes; to play with anesthetic injections, no. I don’t want to put myself in that position again. Can happen once, but no, is not a philosophy of life that I want to follow.

“So let’s see. I am always a positive guy, and I am always expect the things going the right way. So let’s be confident, and let’s be positive. Then let’s see what’s going on.”

The man who raised his Roland Garros finals record to 14-0 said it would have been impossible to play Paris wtihout taking several pain-killing injections throughout the fortnight.

“But at the same time, it’s a big risk in terms of less feelings, a little bit bigger risk of turning your ankle or have produce another stuff there.

“So of course Roland Garros is Roland Garros. Everybody know how much means to me this tournament, so I wanted to keep trying and to give myself a chance here.”

What are the chances Nadal plays Wimbledon for the first time since 2019?

That depends upon how his treatment to deaden the nerves in his foot progress. Nadal said he’s planning to undergo treatment in the next week.

“Now knowing that if we are able to sleep the two nerves that creates an impact on the foot improves that much, then we can try to make a treatment to try to create this feeling in a permanent condition, no?” Nadal said. “So that’s the thing that we are planning to do the next week. I don’t know yet when. And then I don’t know how to say in English exactly the treatment, but gonna be a radio frequency injection on the nerve and trying to burn a little bit the nerve and create the impact that I have now on the nerve for a long period of time.”

The king of clay is hopeful treatment will help alleviate the pain emanating from his left foot as he does not believe surgery is an option.

“That’s what we are gonna try. If that works, I gonna keep going. If that not works, then gonna be another story,” Nadal said. “And then I gonna answer to myself, I gonna ask to myself about if I am ready to do a major thing without being sure that the things are going the proper way, for example. A major surgery that don’t guarantee me to be able to be competitive again and it gonna take a long time to be back.”