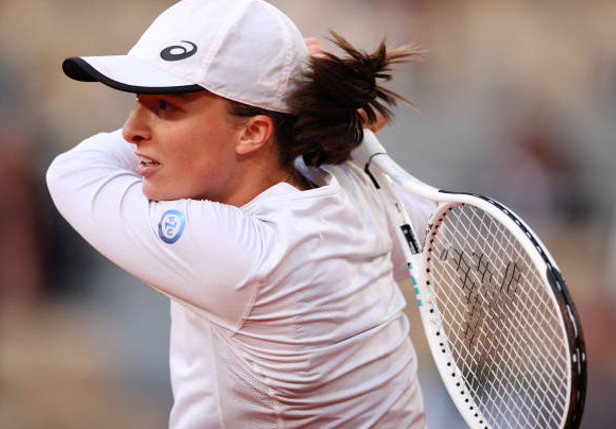 Rock is one secret to Iga Swiatek’s roll.

World No. 1 Swiatek surged past Daria Kasatkina 6-2, 6-1, scoring her 34th straight win to soar into her second Roland Garros final.

The 21-year-old Swiatek can match Venus Williams’ mark for the longest WTA win streak of this century if she defeats 18-year-old Coco Gauff in Saturday’s French Open final.

The thoughtful Swiatek is not only a ball blaster, she’s a headbanger. Swiatek revealed she tunes up for major matches by turning up the classics.

The woman who plays Shoot to Thrill tennis listens to AC/DC, Led Zeppelin and Guns N’ Roses before stepping out on court.

“Well, there are a few bands that I listen to before a match,” Swiatek told the media in Paris. “Led Zeppelin, AC/DC, and Guns N’ Roses, they were always the three that were really kind of perfect for the situation, you know.

“So I use music to kind of have something that’s going to get my brain busy and relaxed before the match. But also when I want to be more energetic, it really helps me.” Swiss Maestro Roger Federer hung out with Young at the 2019 Roland Garros.

The young Federer, sporting shoulder length hair, rocked out to AC/DC in Gstaad.