Nick Kyrgios was a set away from the Washington DC quarterfinals before bad weather saw play cancelled on Thursday evening in the US capital. He and Daria Saville will return to the courts on Friday. 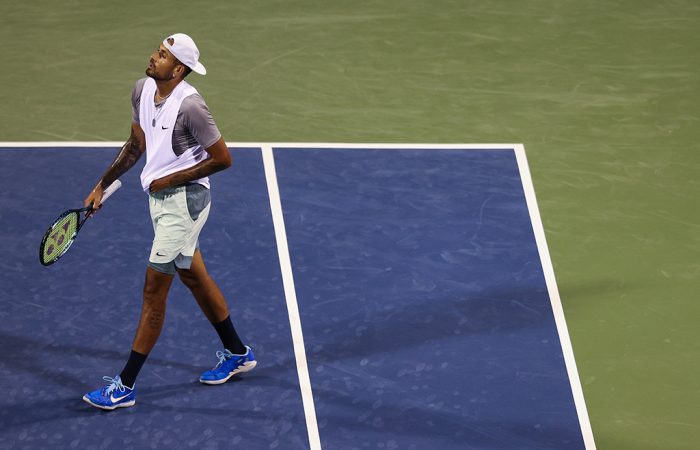 Kyrgios will resume his third-round match against the American on Friday, leading 7-6(1) 2-1 with games going on serve early in the second set.

The winner will advance to a quarterfinal meeting against either Frances Tiafoe or Botic van de Zandschulp, whose match was suspended with scores locked at one set apiece.

Kyrgios, who recently reached the Wimbledon final and has won 14 of his past 17 matches, was a champion at Washington DC in 2019.

Earlier on Thursday, fellow Australian Ajla Tomljanovic was eliminated by Liudmila Samsonova, whose 4-6 6-3 6-2 win moved her through to the quarterfinals.

Samsonova joins another Aussie, Daria Saville, in the last eight; a day earlier, Saville upset No.1 seed Jessica Pegula for her second top-10 win of the 2022 season.

Saville will follow Kyrgios on the tournament’s Stadium court on Friday. (US East Coat time)

Meanwhile, reigning Wimbledon champions Matt Ebden and Max Purcell were stunned in the quarterfinals of the ATP 250 tournament in Los Cabos.

The No.2 seeds fell to the pairing of Tomas Martin Etcheverry and Chun-Hsin Tseng, of Argentina and Chinese Taipei respectively.

Despite the 7-6(3) 6-3 loss, the all-Aussie duo have nevertheless won eight of their past 10 outings.