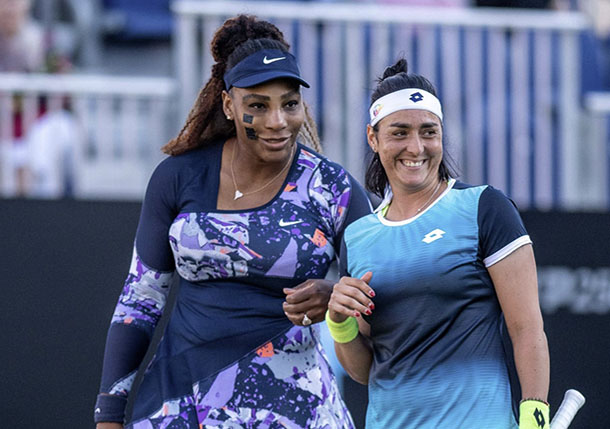 Serena Williams’ comeback will continue though not at Eastbourne.

The former world No. 1 will set her sights on her 21st Wimbledon appearance next week after doubles partner Ons Jabeur withdrew from their scheduled Eastbourne semifinal with a right knee injury.

The withdrawal sends Alekdsandra Krunic and Magda Linette into the Eastbourne final on a walkover.

Williams and Jabeur were 6-2, 6-4 victors over Hao-Ching Chan and Shuko Aoyama at the Rothesay International on Eastbourne’s grass yesterday. That victory came after the pair squeezed out a dramatic 2-6, 6-3, 13-11 opening-round victory over Marie Bouzkova and Sara Sorribes Tormo tha saw the 23-time Grand Slam champion take over the decisive tiebreaker.

Wishing @Ons_Jabeur a speedy recovery & look forward to seeing her back on court soon#RothesayInternational pic.twitter.com/2rZs9WKZ7h

“I think we played together much better today,” Williams said the Wednesday doubles win. “Ons really held me up today. She was playing so good.”