WTA world number one Iga Swiatek is back with another BBC Sport column at the French Open.

The 21-year-old from Poland, who won her first Grand Slam title at Roland Garros in 2020, reached the final in Paris by beating Daria Kasatkina on Thursday to extend her winning streak to 34 matches.

I like watching Coco Gauff – my opponent in the Roland Garros final on Saturday – and maybe this will become a special rivalry for years to come.

I feel like she’s been on tour longer than me and she’s only 18.

Coco has great potential and I hope she will keep improving. I think this tournament has shown she is on the right path.

I remember Coco winning the French Open juniors in 2018 when I really wanted to win. I didn’t play against her, though, because I lost to Caty McNally in the semi-finals.

But when Coco won – she was only 14 – I was like ‘great, I worked so hard and a girl three years younger than me is winning junior Grand Slams’!

It was tough for teenage me to take but I’ve progressed well since.

When I got to meet her more on the WTA Tour, I could see she was staying on a really good level and she deserves her success.

We don’t talk to each other loads when we’re at tournaments, just because we’re both kind of shy! It is pretty hard for introverted people to bond but I really like her.

I feel she is really humble and focused on the job. It seems like she is having fun and has good people around her.

Rivalries are one of the most fun things about sport and there have been some great ones in the history of tennis.

On Tuesday night we all saw Rafael Nadal play Novak Djokovic at Roland Garros and that is one of the greatest ever rivalries.

I think it is good for players to have others that are on a similar level, that makes you more motivated and want to work even harder.

It is amazing how many matches Rafa and Novak have played against each other and how many they have played in the deep stages of the tournaments.

Many of their meetings have been in semi-finals or finals, it shows that the competition between them drives them to higher levels.

It would be nice to have a rivalry, one that would push me to excel, to be more intense and that will challenge me to play my best tennis. I could imagine that.

I wouldn’t want to have a record like Maria Sharapova did against Serena Williams, she won two of their 20 matches. Of course it sometimes happen and numbers aren’t always the most important.

The goal is to enjoy tennis matches but, of course, also to win.

I’ve never thought about who exactly I would like to develop a special rivalry with. It is hard to predict who will stay at the top of the WTA Tour and be consistent.

As well as Coco and maybe Emma Raducanu, I think Leylah Fernandez has the ability to potentially challenge for the Grand Slam trophies.

Leylah has already made two great runs – the quarter-finals here this year and the 2021 US Open final – and if she continues to play that well at more tournaments I think she will be near the top of the rankings.

How rock music is helping my winning streak 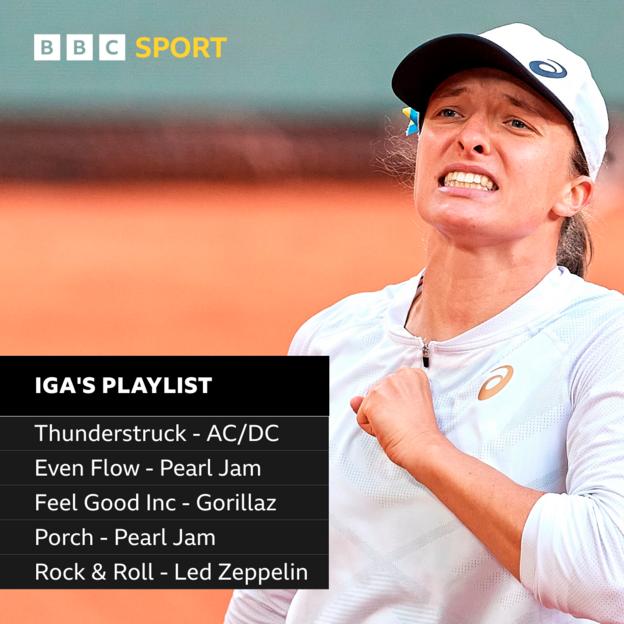 In those final few moments before walking out on to court, you might have seen me wearing my earbuds while I’m waiting to be called out.

I’m always listening to a playlist that I made at the start of the season to get pumped up for my matches.

It’s always rock music. There are five songs from Led Zeppelin, AC/DC, Gorillaz and Pearl Jam and they are on repeat.

If I have time before I go on to court then I will listen to the last two again.

Sometimes music helps me relax before the match but I use this playlist when I want to have more energy.

I started listening to these five songs before the first match this season so when I go on my streaming account and see my most frequent songs it is always the match playlist.

So it’s proved to be a lucky playlist which I don’t want to change before what I hope is one more win here at the French Open.