I Have To Take the Lesson 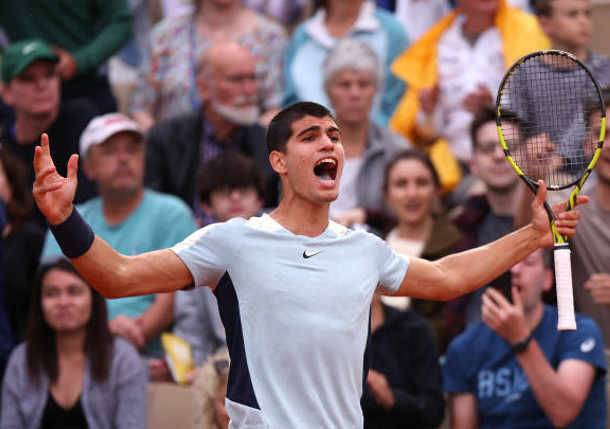 A tough defeat at the hands of Alexander Zverev will not diminish the spirit of rising spirit Carlos Alcaraz.

The Spaniard, who turned 19 on May 5, has only played six Grand Slam main draws, and already reached two quarterfinals. He told reporters that he likes the best-of-five set format, because it gives him time to work his way out of trouble.

There is disappointment, and Alcaraz says he wants to work on starting faster at the Slams, especially against top players.

“I have to take the lesson today,” Alcaraz said. “It was a tough match and close match I think. I could say I didn’t start well, and in this level, quarterfinal of a Grand Slam, you are playing against the best players in the world, so you have to start the match better than I did today.

From Paris with love @alcarazcarlos03, take a bow #RolandGarros pic.twitter.com/CvTx6P1Kuf

Despite the difficult loss, Alcaraz’s belief is intact. He talks like a man that knows his time is coming.

The 19-year-old still managed to enjoy himself thoroughly in Paris. He won his first match at Roland-Garros and proceeded to his second Grand Slam quarter-final. Not bad at all.

“I enjoyed a lot, even I lost,” he said. “Playing in front of such a great crowd, playing in these kind of tournaments, this kind of court, is amazing for me.

“I train for these moments. I mean, I fight with the best player in the world, fight for a ticket of final of a Grand Slam for me, so it’s amazing. That’s why I’m training, that’s why I’m playing tennis, to keep dreaming, to have chances to be in the best tournaments in the world.”