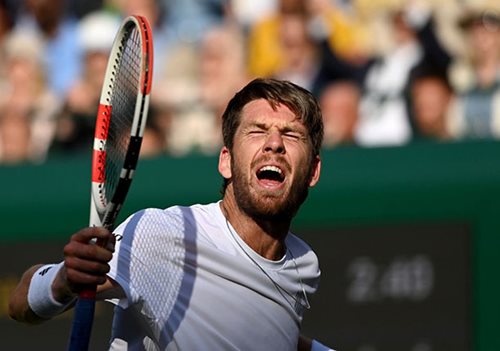 World No. 13 Norrie said he’s willing to pay the price necessary to try to reach world No. 1.

“Physically I can improve, my serve, my return, my volleys—all of my game. I’m still hungry. I still want more,” Norrie told BBC Scotland. “I’m going to make as many sacrifices as I can to give myself the best chance to become world number one and that’s the goal for me.

“Obviously, a long way to go. I believe I have the level and commitment to give myself the best chance.”

The ATP and WTA Tours stripped Wimbledon of its ranking points this year in response to The Championship banning Russian and Belarusian players. Consequently, Norrie did not receive a ranking boost from his run to the final four.

Norrie has earned a reputation as a fitness fanatic and workout beast who has strengthened his stamina on court with his commitment to off-court training.

“He does a lot of fitness, probably more than anyone,” Norrie’s coach Facundo Lugones told the media at Wimbledon. “I don’t even know how much other players do, but it would be hard to beat how many hours Cam does, especially when he’s fitness training with Vasek, do some really intense conditioning sessions on the court where he stays in that red zone where the heartbeat is just insane.”

The 2021 Indian Wells champion believes he can bring his best at next month’s US Open. Norrie, who lost in the 2021 US Open first round to Spanish phenom Carlos Alcaraz, believes Flushing Meadows is his “best chance” at raising Grand Slam silverware.

“I have just been working on a new things and leaving Wimbledon obviously with a lot of confidence and a lot of first experiences for me,” Norrie told BBC Scotland. “It was a lot but it was good fun and I really enjoyed all of it.

“My favorite surface, the US hard courts and the US summer – it’s my best chance. I’m going to have to keep improving and keep playing at this level to have a chance. There’s no reason why I can’t be up there with those top boys.”