Theres a quiet confidence and a growing sense of belonging as Ajla Tomljanovic prepares to contest a Wimbledon quarterfinal for the second straight year. 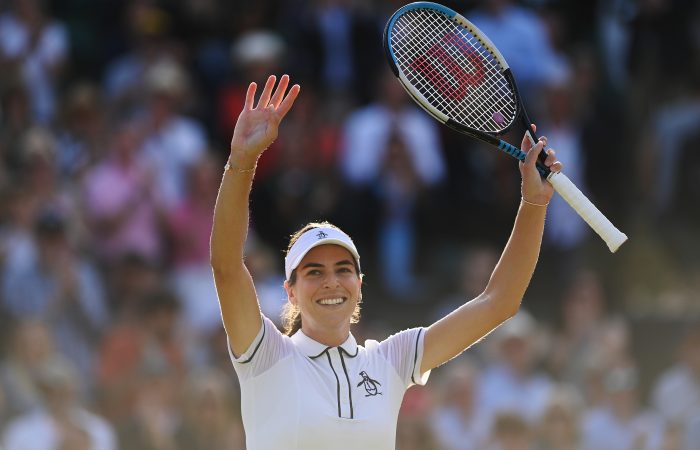 For all the glamour associated with the travelling life of a professional player, it can also be hard work. Just ask Ajla Tomljanovic, whose father has been frantically rebooking her London accommodation this week.

Having originally scheduled a checkout last Friday, Tomljanovic moved hotels after her third-round Wimbledon win over Barbora Krejcikova. When she overcame Alize Cornet to reach the quarterfinals, another extension was required.

“I told him, ‘Listen, I’m not moving from this hotel until I’m out of the tournament. Whatever you got to do, you do it even if I have to share the room with a stranger, I’m not leaving’,” Tomljanovic laughed.

Still, the good-natured Australian noted, “its a good problem to have.”

Indeed, with progress to the final eight for the second straight year at The Championships, the grass-court tournament is now her most successful Slam and she is the first Australian woman to reach back-to-back Wimbledon quarterfinals in 22 years.

It adds to world No.44 Tomljanovics sometimes shaky belief that she belongs at the top of the sport.

“Coming in, you’re not seeded so you don’t know what can happen,” said the 29-year-old Tomljanovic after her fourth-round victory over world No.14 Krejcikova.

“I dont know what really my form was coming in I just knew that I could produce good tennis, but actually doing it, it feels really nice. Just kind of confirms that, you know, I maybe belong here.”

Tomljanovics recent form at The Championships would certainly reflect as much. In her past two match wins, over Krejcikova and Cornet, the Australian has recovered from a first-set loss.

A successful two-hour, 35-minute battle against Cornet, who earlier stunned world No.1 Iga Swiatek, reflects the more pleasing mentality that Tomljanovic has established in recent years.

“When we started playing, she was playing at a really high level. Sometimes I can feel that I’m more on edge. When I miss a point, I’m tougher on myself. It takes more energy out of me,” Tomljanovic said.

“I remember at, like, maybe halfway through the second set, I just completely stopped giving any negative or positive emotion, and just tried to be really measured.”

Tomljanovic will aim to bring more of that competitive spirit into her quarterfinal contest with Kazakhstans Elena Rybakina, who claimed a straight-sets win in their only previous meeting at Madrid last year.

But while the world No.23 Rybakina is contesting only her second Wimbledon main draw, Tomljanovic believes the experience she gained in last years quarterfinal loss to eventual champion Ash Barty could provide an advantage.

“The way everything happened, it was so quick. I played someone that was playing unbelievable tennis. For her, being on Centre Court, was like being in her backyard. For me, it was a huge occasion,” the Australian reflected.

“Now I think I’m in a different spot, for sure. Obviously Elena is a great player. Whoever’s in the quarters is doing great. I think it’s definitely a little bit of a different matchup for me … I think I have a better shot.”

Some high-profile supporters agree. Former world No.1 Chris Evert is one of Tomljanovics closest confidantes, and the three-time Wimbledon ladies singles champion reached out both before and after her latest match.

“She texted me before the match that she believes in me and that I need to believe that I belong here,” said Tomljanovic.

“She called me right away after. It’s like surreal. Chris Evert is calling me after I made the quarters. To me, she’s just Chrissie. I’m very blessed to have her in my corner, that’s for sure.”

Book online, play today:Visitplay.tennis.com.au to get out on court and have some fun!