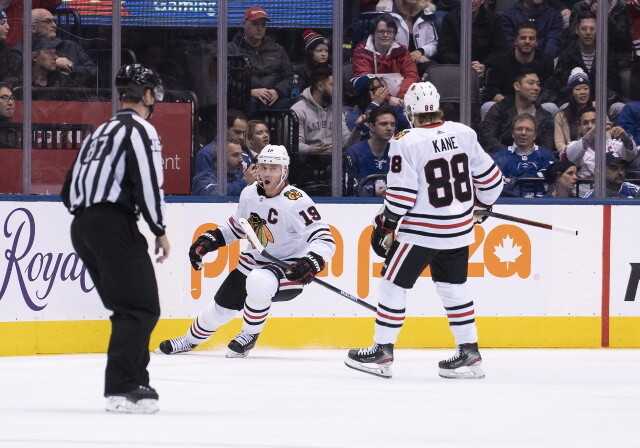 Jay Zawaski: From a scout source on the Chicago Blackhawks situation: You know me, I work in this game. Im pretty reserved & level-headedColliton needs to be relieved. And you must relieve the man who hired him. This thing is beyond repair & it needs to be cleaned really all the way to top down.

Ben Pope: Chicago Blackhawks defenseman Seth Jones: “At the end of the day, this isn’t a coaching problem. This is a locker room thing. The players are on the ice, playing the game. We have to all get on the same page and have a common goal in what our identity is.”

Will the Blackhawks make Kane and Toews available at some point?

Both Kane and Toews have two years left on their deals at $10.5 million and both have no-movement clauses.

Sharks may not get a ‘Richards-like settlement’ for Kane

Sheng Peng of San Jose Hockey Now: The San Jose Sharks don’t have the option to terminate Evander Kane’s contract. He has three more years after this season left on his deal at $7 million per.

SJHN wondered months ago if they could do a ‘Mike Richards-like settlement.’

“In June 2015, the Los Angeles Kings terminated Mike Richardss contract and the NHLPA filed a grievance on the players behalf. Eventually, the Kings and Richards reached a settlement Los Angeles ended up paying 60 percent of Richardss remaining contract over the next 17 years, cap hit included.”

An NHL source recently said that this type of settlement may not work at this point. The case against Kane may not be as strong as it was against Richards.

When Richards’ case was going down, the other teams weren’t happy at all. The NHLPA also got in writing then that the Richards grievance couldn’t be used as a precedent.