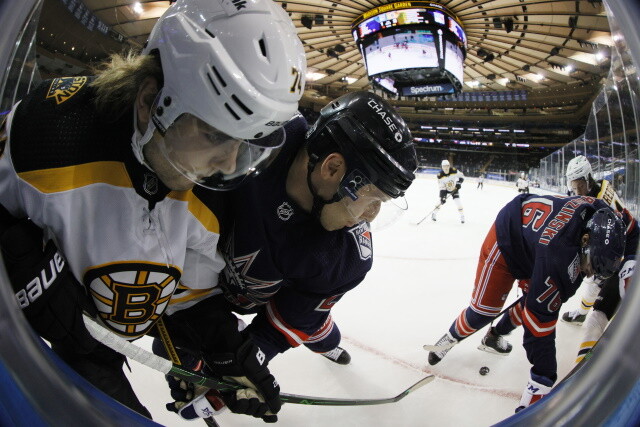 The Bruins looking for a defenseman … Would DeBrusk work for the Rangers?

Jimmy Murphy of Boston Hockey Now: There has been no indication that the Boston Bruins have spoken with the New York Rangers, who are looking for a middle-six forward.

Multiple sources have said that Bruins forward Jake DeBrusk remains in the rumor mill, who has recently been moved to the fourth line.

BHN reported the Bruins could be looking for a defenseman. The Rangers don’t appear to have any defenseman that would fit for the Bruins for the two sides to make a deal. DeBrusk is a pending free agent and Bruins GM Don Sweeney would likely ask for a second-round pick for him.

Moving him for a pick would clear his cap hit for the Bruins, and it could still leave the Rangers with $5.5 million in cap space.

Quebec back in the news

Sportsnet: Quebec and NHL are in the news again as Quebec premier Francois Leaguault said that he’ll be talking with NHL commissioner Gary Bettman. Jeff Marek on Sportsnet last night.

“So, a couple of things. The premier talked about soliciting Quebec investors to form a consortium so it’s not just one group that would bring the Nordiques back, and they also discussed how the government may consider investing their own capital in the project as well, this probably in the neighbourhood of a billion dollars.

“We’d love to see the Nordiques back … of course we would, but as people have mentioned to me, keep in mind here we’re one year out of another provincial election and the campaigning may have already begun. Hockey is always a hot-button issue, sometimes it’s a hot potato, we expect it to be very much over the next 11 months.

“But you have to check it out. So, I texted with Bill Daly this morning, the deputy commissioner of the NHL, and he said a couple of things. He said: Yes, we did talk over the phone. No, we don’t have any meetings planned right now. Yes, we are always interested in meeting and talking but, quote, ‘We are obviously pleased with what we have right now.’ We’ll see where this thing heads.”