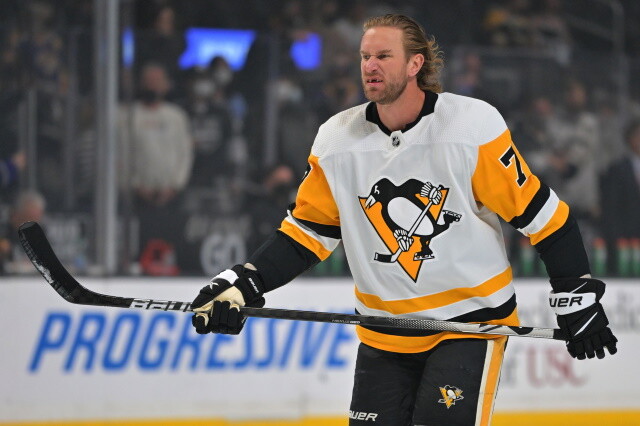 Bob McKenzie: The Pittsburgh Penguins have re-signed forward Jeff Carter to a two-year deal with a $3.125 million cap hit. He’ll get $3.25 million in the first year and $3 million in the second year. Carter has a full no-movement clause in both years.

Josh Yohe: “Signing a 37-year-old center to a two-year deal is a pretty good indication that the Penguins are keeping the band together. No rebuild coming for a while.”

Pens Inside Scoop: Penguins GM Ron Hextall on Carter: “Jeff’s experience and versatility have made him a valuable addition to our team. In addition to his on-ice contributions, his team-first attitude has made him a leader inside our locker room, and we are happy to have him under contract for two more years.”

Mike DeFabo: Carter two weeks ago: “I think the trade has worked out great for me. I think its given me another boost in my career and probably prolonged it a few more years, hopefully.

The Pittsburgh Penguing have re-signed Jeff Carter to two-year extension with $3.125M per year. We know, the Penguins are happy with him, but we don’t like this deal a lot. As you can see, he’s having negative impact on his teammates and he’s 37 years old already. pic.twitter.com/zSKOzPYvLR

Prospects heading to the Olympics

Brandon Holmes: List of NHL prospects that will be participating in the 2022 Winter Olympics.