Giants defense about to show ‘so much aggression’ led by...

EAST RUTHERFORD, N.J. — The New York Giants defense will look different this season, which isn’t a bad thing considering it ranked 21st overall last year. When teams wanted — and needed — to score on them, they usually did.

Defensive coordinator Don “Wink” Martindale inherits a group that pressured opposing quarterbacks on just 24.2% of dropbacks last season, fifth worst per NFL Next Gen Stats. General manager Joe Schoen addressed the issue, using the fifth overall pick in the 2022 NFL draft on edge rusher Kayvon Thibodeaux to headline what is expected to be an aggressive defense that relies on the perception of pressure from all over the formation to stress opposing offenses.

“You want to dictate to the offense instead of sitting there and letting them dictate to you,” Martindale said last week. “I think this is a game of adjustments and matchups and everything else, but I would rather them have the headache and stay up five nights before we play them figuring out what we’re going to do and [we will] try to present different looks every time we play, because pressure does break pipes. That’s our philosophy.” 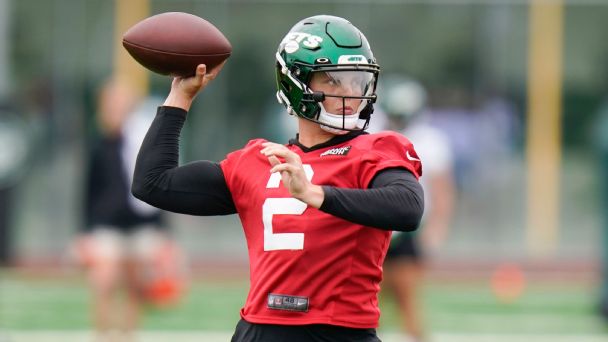 It is embraced by his players.

“Oh, Wink, it’s really fun. I think we’re all enjoying it,” safety Xavier McKinney said. “You know, just so much aggression. It’s just giving us energy. We’re able to go out there and play without worrying about making mistakes, so it’s just giving us a lot of freedom to just go play, go attack and be the playmakers that we have on our defense.”

“Puts a lot of people at the line of scrimmage,” is how one scout described a Martindale-led defense. “He doesn’t coach scared.”

Enter Thibodeaux, whose first step and speed will be utilized throughout this defense. The belief is he’s the high-end pass-rusher the Giants have been missing for years, a player who can be the centerpiece for Martindale. New York has had only one true edge rusher (Markus Golden in 2018) record double-digit sacks over the past seven seasons. Baltimore also only had one edge rusher (Terrell Suggs, 2017) reach double-digit sacks during that same span, yet Martindale had defenses ranked among the top 10 in three of his four seasons as coordinator.

Martindale and outside linebackers coach Drew Wilkins’ viewed Thibodeaux as the top-ranked edge rusher in the draft, in part because they can envision him rushing from various positions, including inside where they believe his speed can be a matchup nightmare against an overmatched interior lineman.

“He was just such a great fit for us in Wink’s defense,” Wilkins said. “He has all the skill sets we look for. He can be a dominant edge-setter, explosive, violent, relentless pass-rusher and then everything else you can see that is required.”

What you need to know about the New York Giants:

Martindale’s pressure often leaves his cornerbacks on an island, and in his four seasons as coordinator Baltimore played the fifth-most man-to-man defense (39.9%) in the NFL according to NFL Next Gen Stats.

It proved to be a problem last season when an injury-ravaged secondary contributed to the Ravens’ ranking last in pass defense.

“Don’t go to DoorDash to find a backup corner,” is what Martindale said he learned.

It could get tricky this season in New York, because the Giants lost top cornerback James Bradberry recently as a salary-cap casualty. Adoree’ Jackson, who has missed 22 games over the past three seasons, is their No. 1 corner and 2021 third-round pick Aaron Robinson is the favorite to win the other starting job.

The Giants secondary has a combined 111 career starts, which makes it a serious question mark entering the season considering what Martindale wants to do. Jackson welcomes the challenge.

“I feel like everything, it turns into [man-to-man coverage],” he said. “Whoever comes down and I’m playing whatever it is, zone, I’ve pretty much got them. I end up matching [up]. … It’s third-and-5 and he runs an 8-yard out? You’re going to match it … You’re not just going to stay in your third [of the field] because that’s what your task tells you to do. At the end of the day, it’s about being a football player and understanding what’s going on.”

With a retooled pass rush and questions in the secondary — the Giants signed unemployed former Ravens cornerbacks Maurice Canady and Khalil Dorsey on May 18 — the bar is set rather low for Martindale’s defense this season. He doesn’t seem to care.

“Look, we’ll control the narrative. That’s what I’ll tell you,” Martindale said. “People can say what they want to say. We’ll see when it’s time to kick it off down there in Nashville [against the Tennessee Titans in Week 1]. We’ll see where we’re going to be at by then. But we control the narrative in the room, and I’m excited about this season.”