‘Upset’ Elijah Mitchell out for 49ers with sprained MCL 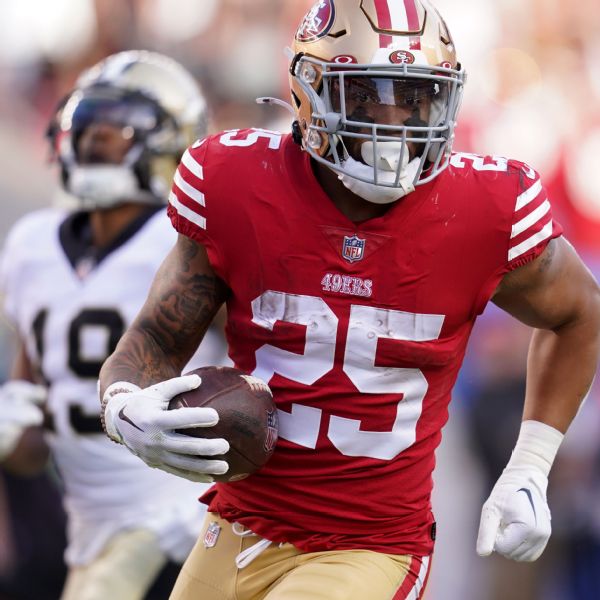 SANTA CLARA, Calif. — Immediately after Sunday’s win against the New Orleans Saints, the San Francisco 49ers were disappointed that running back Elijah Mitchell sprained his left knee but optimistic it wouldn’t be serious enough to keep him out for long.

That optimism vanished Monday when further testing on Mitchell’s knee revealed a sprained MCL strikingly similar to the one he sustained in his right knee in Week 1. Which is to say Mitchell will again miss six to eight weeks and land on the injured reserve list.

“It wasn’t the news we were looking for,” coach Kyle Shanahan said. “He’s pretty disappointed. Everyone knows how good Elijah has been, how hard he worked to get back from his last one, how good he’s been playing since he came back, and to kind of be right back there, I know he was real down on it. It’s unfortunate for him. He’s just had some real bad luck.”

Mitchell suffered a right knee sprain in a Week 1 loss to the Chicago Bears and returned in Week 10 against the Los Angeles Chargers after he was activated from injured reserve. Under league rules, players who have been on injured reserve and brought back can go through the process again in the same season.

The Niners hope that they can extend their season long enough for Mitchell to return again.

“He knows what’s ahead of him,” Shanahan said. “He’s just going to have about six weeks of frustration, but hopefully we can do our job here so when he comes back, we’re still playing.”

Mitchell suffered the injury early in the third quarter when he got rolled up on. He attempted to continue playing but soon had to exit the game and was ruled out. He departed with seven carries for 35 yards and two catches for 8 yards.

Mitchell isn’t the only Niners running back dealing with a knee issue coming out of Sunday’s game. Starter Christian McCaffrey has what Shanahan is calling “irritation” in his left knee and will have to be managed throughout this week of practice before Sunday’s meeting with the Miami Dolphins.

Those issues leave rookies Jordan Mason and Tyrion Davis-Price as the only healthy running backs on San Francisco’s active roster. Mason closed out the game Sunday with five carries for 25 yards.

“It was really impressive,” Shanahan said. “I think you could feel him like you did in the preseason when he got those carries. I know we could from the sidelines … That was real encouraging, and it’s going to open up some opportunities for him and also for Ty to get a chance to get back out there.”

Right guard Spencer Burford (sprained right ankle) was the only other 49ers injury of note Sunday. Shanahan said Burford could return to practice as soon as late this week.

In better injury news, the 49ers avoided any significant problems with quarterback Jimmy Garoppolo, who was in pain after Sunday’s game from a hit he took to his lower left leg and knee.

“It was a relief that no serious injuries came up,” Shanahan said. “I know he’s pretty sore today and stuff. So, hopefully he’ll work that out by Wednesday but nothing serious.”

The Niners could also welcome back a key defensive player this week as defensive lineman Arik Armstead, who has been out since Week 4 with foot and ankle injuries, is expected to practice Wednesday after rejoining the team last Friday.