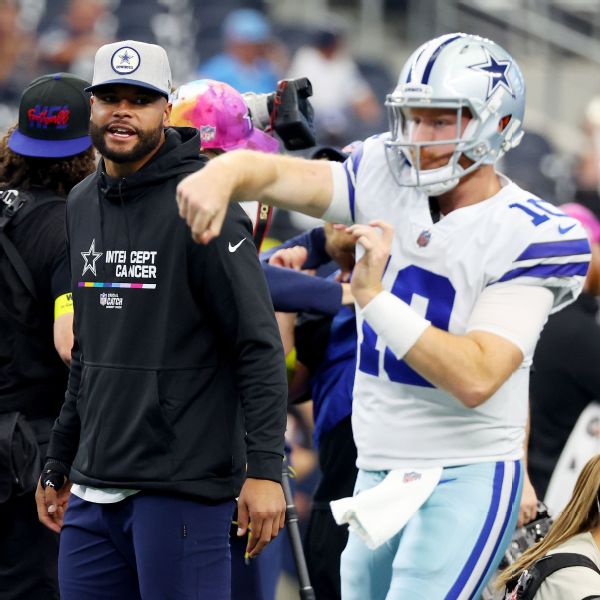 FRISCO, Texas — Dallas Cowboys owner and general manager Jerry Jones would not rule out Dak Prescott from playing Sunday against the Los Angeles Rams, but he acknowledged the quarterback’s grip on a football is “not well enough to play” at the moment.

“I don’t know that you could ask for better news technically, physically in how it’s responding, how it’s healing so to speak,” Jones said. “So all of those things are on go and I don’t know that as we bid bye to each day if considering the injury, considering the location of the injury, I don’t know that you could make any more progress. There’s some things here about healing that again I often say only the man upstairs knows how that works, but he’ll have a big week and he’ll be hard on himself getting it ready to go.”

Prescott is scheduled to meet with the doctors Tuesday. He had surgery Sept. 12 and had the stitch removed from his right thumb Sept. 26. Last week, Mike McCarthy said Prescott was still dealing with swelling in the joint, and Jones said after the win against the Washington Commanders that Prescott has yet to really throw the ball.

On Monday, McCarthy said he wants Prescott to go through a full week of practice before returning.

“I mean we’re not talking about being out one week here, you know?” McCarthy said.


Jones said on the radio, “We need to have that process before we [go] in a ballgame. Can’t eliminate the week’s work and be ready to go, especially not at quarterback.”

If Prescott is not ready, Cooper Rush will make his fourth straight start. Rush became the first Cowboys quarterback to win the first four starts of a career (he was 1-0 last season). In his three starts this season, he has four touchdowns and no interceptions, and he has been sacked just twice.

Asked if there was a number of games or wins that would make the Cowboys stick with Rush the way they did Prescott in 2016 when Tony Romo was healthy, Jones said, “No, as I see it right today.”