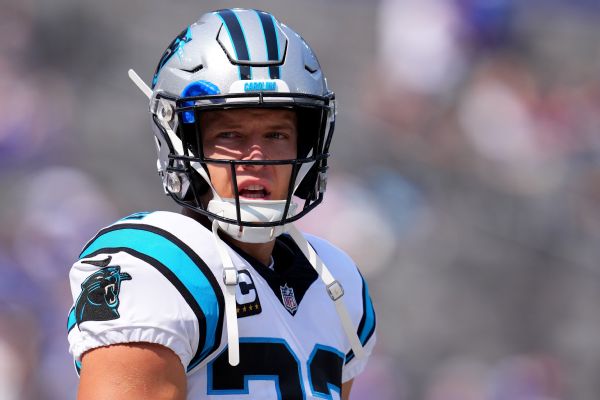 CHARLOTTE, N.C. — Carolina Panthers running back Christian McCaffrey returned to practice Friday in a limited capacity after missing two days with a quad injury, but his status for Sunday’s game against the Arizona Cardinals remains in question.

“We’re very hopeful that Christian will play,” coach Matt Rhule said Friday. “He looked good today. Unless something comes up, I’m sure he’ll give it his best chance to go. We’re hopeful.”

McCaffrey missed 23 of 33 games the past two seasons, including the final four in 2020 because of a quad injury suffered while rehabbing from a shoulder injury.

Offensive coordinator Ben McAdoo was noncommittal about whether McCaffrey would be available for the Cardinals (1-2).

McCaffrey was listed on the injury report last Thursday with ankle stiffness but was a full participant in Friday’s practice and played 80 percent of the snaps (49) against the Saints.

He actually made fun of being on the report last week, saying, “At this point, if I took a leak during practice I’d end up on the report.”

McCaffrey rushed 25 times for 108 yards against New Orleans, topping the century mark in consecutive weeks for the first time since the 2019 season, when he became the third player in NFL history to top 1,000 yards rushing and receiving in the same season.

McCaffrey is tied with Baltimore Ravens quarterback Lamar Jackson for fifth in the NFL in rushing with 243 yards on 50 carries. He leads Carolina in receptions with 10 for 57 yards.

Should he not be available on Sunday, the Panthers would turn to second-year player Chuba Hubbard and D’Onta Foreman, acquired in free agency after he stepped in for Tennessee Titans running back Derrick Henry last season.

Quarterback Baker Mayfield said while there’s confidence in Hubbard and Foreman, it changes the defense’s approach to the Carolina offense if McCaffrey doesn’t play.

“Whether it’s bringing multiple guys to take Christian away, loading up the box for the run game. We’ll see. Obviously, I don’t have the answers for whether he’s going or not. Right now I’m preparing like he is, and will react later on.”

Asked if he had a sense for whether McCaffrey would play Sunday, Mayfield joked, “Nah, he’s gone ‘Zero Dark Thirty’ on us. He’s keeping us guessing.”