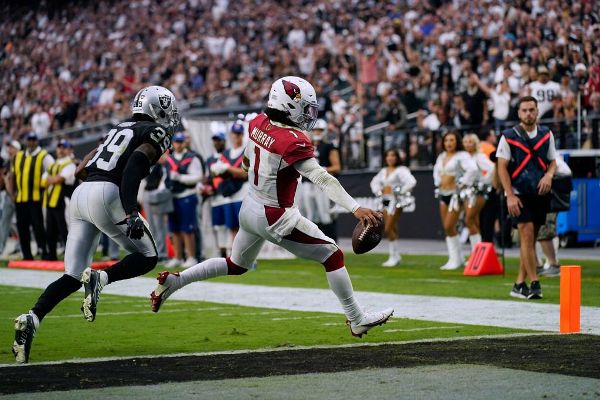 LAS VEGAS — After hardly playing in the first half, Arizona Cardinals linebacker Isaiah Simmons came up with the biggest play of the game in overtime to help Arizona to a 29-23 win over the Las Vegas Raiders on Sunday.

Simmons, who knew all week his role would be drastically reduced while he improved on his practice habits, knocked the ball out of the hands of Raiders wide receiver Hunter Renfrow before it was scooped by cornerback Byron Murphy Jr., who returned the fumble 59 yards for the winning touchdown.

“Everything was a blur,” Murphy said. “I just saw the end zone. ‘I gotta get to the end zone to end this game,’ that’s the first thing I was thinking the whole time.”

But a game full of drama wasn’t without some in the final seconds. Murphy’s touchdown was reviewed to see if he let the ball out of his hand before he crossed the finish line. Cardinals coach Kliff Kingsbury waved his team to the locker room during the review, joking afterward that he told his players to get on the bus.

After a lengthy review, the touchdown was upheld, giving Arizona its first win of the season.

At first, Murphy thought the review was “a little questionable.”

“But now that I’ve seen that, I’m taking that ball all the way to the house, to the crib, back to Arizona,” Murphy said.

“Luckily, he’s not a meme for the next 30 years of his life,” Kingsbury said.

The comeback started with the Cardinals down 20 at halftime and ended with them winning by six. They scored 16 unanswered points in the fourth quarter.

It was how Arizona got to the extra period that showed how valuable Murray, who signed a mega five-year extension this offseason worth up to $230.5 million, is to the Cardinals. And it was a masterclass in Murray’s ability to keep plays alive and then make plays with his feet.

The Raiders knew they had him contained in the first half, but in the second, Murray “was just running around,” Raiders safety Duron Harmon said. Murray threw for 277 yards with a touchdown and an interception on 31-of-49 passing. He also ran for 28 yards and a touchdown on five carries.

That touchdown pulled the Cardinals within 23-21 after Murray scored from the 3-yard line as time expired. However, it was a 2-yard run by Murray on fourth-and-1 with 2:28 left in the game that kept Arizona’s hopes alive. He got the first down, and the Cardinals’ game-tying drive continued.

“He’s a special talent,” Kingsbury said of Murray. “You can see when he’s able to do his thing, that’s what he does, and he had some tremendous plays, and the numbers may not be great, [but] we don’t care about numbers.”

With time expiring and the Cardinals down 8 points, Murray stepped up in the pocket as the Raiders’ pass rush closed in around him and then took off to the left and won a foot race to the far left corner of the end zone to make it 23-21. Murray then hit A.J. Green on the ensuing 2-point conversion with no time on the clock in a play that also went through a lengthy review. It was also upheld, leading to the extra period.

The Cardinals pulled the play off after Murray had to use a delay-of-game penalty to get more time after Arizona couldn’t get lined up coming out of a timeout. There were issues with the Cardinals’ substitution and then getting receivers where they were supposed to be. Murray took the penalty, which moved the Cardinals back to the 7-yard line, and then he hit Green.

“I didn’t want to risk [it],” Murray said. “The game was too important. I thought it was smarter to take the delay of game. I don’t want to waste this play and give them a free one, because we weren’t ready or we all discombobulated at the end.

“I didn’t think that was smart.”

Murray also pulled off a unique 2-point conversion earlier in the fourth quarter to get Arizona in a position to tie. After Murray hit wide receiver Marquise Brown for a 24-yard pass down the left sideline to give Arizona the ball at the 1, running back Darrel Williams pushed it in for a touchdown, pulling Arizona to within 23-13.

On the ensuing 2-point conversion, Murray ran 84.9 yards, according to NFL Next Gen Stats, as he scrambled, backpedaled and moved around before running the ball into the end zone, cutting the Raiders’ lead to 23-15.

The play didn’t seem long to just those watching. It felt “pretty long” to Murray, too.

“I want to say they dropped nine, had two people rushing. I knew they weren’t going to be able to tackle me,” Murray said. “It was just about, hopefully, backyard football at that point, trying to find somebody, move, get open and make a play.”

Kingsbury joked that he gave a “super inspirational and moving” halftime speech to spark the comeback, but, ultimately, it simply came down to Arizona executing its offense better.

Although that’s what the Cardinals needed to do to come back from a 20-point deficit, it led to a stressful second half.

“There’s so many do-or-die plays, I lost count, where we had to have this stop, had to have this 2-point conversion, had to score, had to have the fourth down,” Kingsbury said. “And guys just kept fighting. I mean nobody blinked. At halftime it was just, ‘Hey, we got to settle in and do what we do.’

“We played about as bad as you could the first half and didn’t play great the second half, but the effort was incredible.”

Leaving Vegas a winner on a Sunday was a different feeling for Kingsbury.

“I was telling those coaches, usually I’ve just lost and I’m super hungover on Sundays in Vegas, so this is a good changeup,” he said.

The moment Murphy crossed the goal line, mayhem ensued on the field. The entire Cardinals bench emptied on the field to celebrate, and the celebration carried over into the locker room.

“It’s crazy to see just us celebrating, the 53 guys and coaches and staff and then the whole stadium is dead silent,” left guard Justin Pugh said. “That’s the most beautiful thing in sports.”