Baltimore Ravens’ Lamar Jackson shuts down all point out of contract 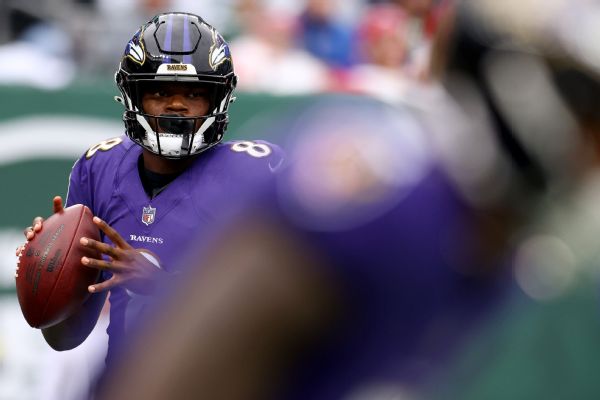 OWINGS MILLS, Md. — Baltimore Ravens quarterback Lamar Jackson is officially finished talking about his contract situation, declining to answer three questions Wednesday that were related to his stalled negotiations with the team.

On Sunday, sources told ESPN’s Chris Mortensen and Adam Schefter that Jackson turned down the Ravens’ five-year extension offer worth over $250 million with $133 million guaranteed at signing. Sources added that team officials balked at Jackson’s desire to have a fully guaranteed deal, similar to the one given to Deshaun Watson, which led to the Ravens announcing Friday that talks had been suspended until the end of the season.

After the Ravens’ 24-9 win over the Jets on Sunday, Jackson told ESPN’s Dianna Russini that he turned down an offer that included guaranteed money between $160 million and $180 million. Now, Jackson will play under his fifth-year option, which will pay him $23.016 million this season.

On Wednesday, Jackson shut down all questions about contract negotiations with the Ravens.

Asked why the guaranteed money was so important to him, Jackson smiled and said, “Like I said. I’m done talking about that, respectfully. Dolphin time, man.”

Jackson came to the media session with a bag of popcorn, saying he would pass it out for good questions. It became clear early that, from the line of questioning, Jackson wasn’t going to hand out much of his snack.

In other news, Ravens No. 1 running back J.K. Dobbins was a full participant in Wednesday’s practice, which means he’s trending toward playing in his first game of the season. Dobbins, who was limited all last week, missed all of last season after significantly injuring his left knee.

“He’s looking pretty good to me,” Jackson said of Dobbins.