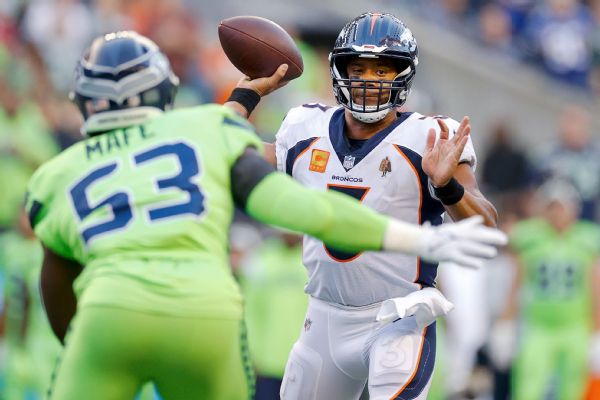 SEATTLE — With the emotional wounds on both sides still fresh and the rest of the story still to be told, Denver Broncos quarterback Russell Wilson returned to his decade-long home in Seattle in a raucous season-opener Monday night.

And when all was said and done, the boos from the Seahawks‘ faithful had rained down throughout the evening, Seattle quarterback Geno Smith played some of his best football and the Broncos offense couldn’t turn yards into points in an effort when they lost fumbles twice on plays from the 1-yard line in a 17-16 Broncos loss.

And in a stadium where Wilson had orchestrated so many dramatic comeback wins, Wilson’s and Denver’s efforts fell short on a miss of a 64-yard field goal attempt by Brandon McManus with 15 seconds left to play.

Wilson finished the night 29-of-42 for 340 yards and a touchdown in his first start for the Broncos since the team sent five draft picks, including two first-round picks, two second-round picks and three players to Seattle to acquire Wilson this past March.

Almost from the moment the full NFL schedule was released, the Wilson-Seahawks reunion was circled on plenty of calendars. Wilson, his new teammates with the Broncos and the Seahawks all publicly had played the just-another-game crowd.

But the answer to the question of whether or not Wilson would be booed after 10 seasons in Seattle that included nine Pro Bowl selections, two Super Bowl trips and one Super Bowl win was answered from the moment Wilson took the field for pre-game. The Seahawks faithful booed lustily throughout.

The crowd, as if it was effort to show many of those on had moved on, even chanted “Ge-no, Ge-no, Ge-no” whenever Smith made any plays of note, and Seahawks coach Pete Carroll was often gesturing to the crowd to get louder whenever the Broncos had the ball. The crowd chanted Smith’s name as the quarterback took the final kneel-downs to seal the win.

Wilson played a toned-down tempo for much of the first half — he didn’t target or complete a pass to a Broncos wide receiver until there was just 5 minutes, 34 seconds remaining in the first half. However, that play was a 65-yard catch-and-run completion for a touchdown that tied the game at 10-10.

Smith, who won a training camp battle for the starting job against Drew Lock, one of the players the Broncos sent to Seattle, was almost perfect in the first half. Smith completed his first 13 passes of the game, was 17-of-18 with two touchdowns as the Seahawks had a 17-13 halftime lead.

Wilson had arrived to the stadium in a fashion-week worthy ensemble several hours before kickoff, and almost every moment was a reunion of sorts as he moved through the stadium and through his warm-ups.

A handshake here, a wave there, Wilson went about the business of attempting to at least continue to stick to the script he and the rest of the Broncos had tried to keep to all through the days and weeks leading up to Monday’s game.

For Seahawks cornerback Richard Sherman showed on stadium video boards 30 minutes before kickoff to a loud ovation. And former Seahawks running back Marshawn Lynch was another of several former Seattle players roaming the sidelines during warmups.

It all ended with McManus’ miss and a celebrations by the “12s” Wilson had hoped would welcome him back.

Melvin Gordon says he is signing on...