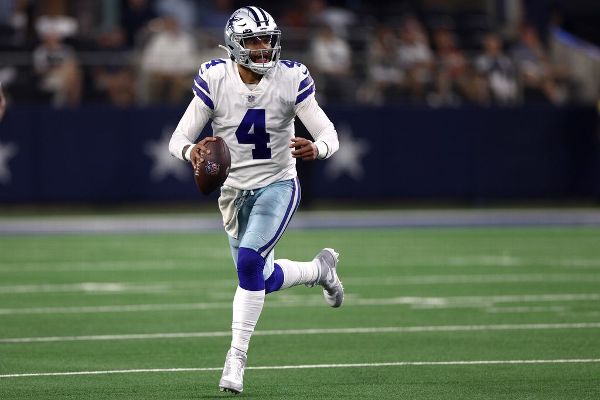 ARLINGTON, Texas — Dallas Cowboys quarterback Dak Prescott will be out “several weeks” due to an injury to his thumb that requires surgery, owner Jerry Jones said after Sunday’s 19-3 loss to the Tampa Bay Buccaneers.

Prescott jogged to the locker room late in the fourth quarter to get his right hand examined after he hit the hand of Buccaneers outside linebacker Shaq Barrett and did not return. Jones said Prescott suffered a fracture near the thumb on his throwing hand.

The Cowboys will likely turn to backup quarterback Cooper Rush for next week’s game against the Cincinnati Bengals.

Prescott, who is now 2-5 in season openers in his career, completed 14 of 29 passes for 134 yards and was intercepted once and sacked twice while the Cowboys were held without a touchdown in a season opener for the first time since 2001.

The last time the Cowboys scored fewer than 6 points in a season opener was Sept. 10, 1989, a 28-0 loss to the New Orleans Saints, which was the first game of Jones’ tenure as owner and general manager and the debut of Troy Aikman and Jimmy Johnson.

The injury caps a strange week for Prescott, who was limited in last Thursday’s practice because of a sore ankle that he blamed on a new pair of cleats. Prescott kept insisting he was fine and it would not be an issue against the Buccaneers after going through full workouts on Friday and Saturday.

Prescott suffered a compound fracture and dislocation of his right ankle in the fifth game of the 2020 season against the New York Giants. He returned to start 16 games last season, setting a Cowboys’ single-season record with 37 touchdown passes. He missed one start with a calf strain.

On the opening drive Sunday, Prescott completed passes to four different receivers as the Cowboys moved 54 yards on 14 plays to take a 3-0 lead after a 51-yard field goal by Brett Maher. They went three-plus series before they would gain another first down — on a 12-yard run by Prescott.

CeeDee Lamb caught one pass after the first drive but just one more from Prescott the rest of the way.

The Cowboys signed Prescott to a four-year, $160 million contract in 2021.