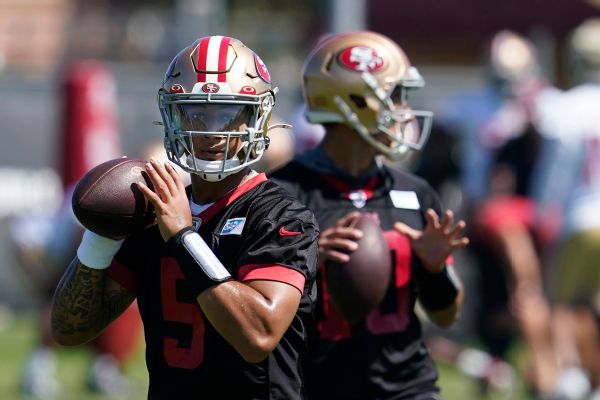 SANTA CLARA, Calif. — As the San Francisco 49ers prepare to open the 2022 NFL season against the Chicago Bears on Sunday, coach Kyle Shanahan is well aware of the outside chatter about his unique quarterback situation.

Shanahan already had an idea of how people would react when the Niners and incumbent starter Jimmy Garoppolo agreed to a revised contract to retain Garoppolo as the backup to new starter Trey Lance.

And Shanahan is also well aware of how the drumbeat for a quarterback change will grow louder if and when Lance struggles.

“We all know how it would go,” Shanahan said. “We understand that. The fact that he has a successful quarterback behind him, it’s obvious how that narrative will be and understandably so.”

Before finalizing the re-worked contract with Garoppolo, Shanahan met with about 15 veteran players to let them know the plan to keep both quarterbacks and have an open discussion about how it would work.

Shanahan’s message to his team was to make sure they support Lance just as they did Garoppolo whenever he struggled.

“Our players also know Jimmy went through some tough times, too, and they had his back regardless of if they thought there was a better option,” Shanahan said. “You’ve got to realize when you do struggle, those guys know it’s a lot harder to play well when no one has your back. You’ve got to help guys through that. And I think we have got the guys who can do that. I think our guys did that for Jimmy when he was here, even when he was having some tough times and allowed him to fight through that, and I believe our guys will do the same thing for Trey.

“I understand what people outside of our locker room will say and they are right in terms of human nature to do that. But it’s going to happen regardless if you don’t play well.”

Lance will make his third NFL start on Sunday but his first since being named to the role by Shanahan on July 26. On Wednesday, Shanahan expressed confidence in Lance, noting that he got “as many reps as he’s ever gotten before” after a full offseason program and training camp at the top of the depth chart.

When the Niners and Bears kick off Sunday, Lance, at 22 years and 125 days old, will become the youngest quarterback to start an opener for San Francisco since it joined the NFL in 1950.

For his part, Lance said he feels like the chance to get back into regular-season mode as the starter is a welcome adjustment because he hasn’t been a starting quarterback entering a full season since 2019 at North Dakota State.

“It’s different for sure,” Lance said. “Definitely a breath of fresh air, refreshing to game-plan against somebody, watch somebody else’s tape and learn some new things.”

One thing that isn’t on Lance’s mind as the season opens is the fact that he was not voted a captain in his first year as the starter. The Niners named six players — tight end George Kittle, left tackle Trent Williams, end Nick Bosa, defensive lineman Arik Armstead, safety Jimmie Ward and linebacker Fred Warner — as captains on Wednesday.

According to Shanahan, Lance and wideout Deebo Samuel narrowly missed the cut in spots seven and eight, respectively, as voted on by their teammates.

As for Garoppolo, his return to Chicago will offer a full-circle moment of sorts. A native of Arlington Heights, Illinois, a suburb of Chicago, Garoppolo made his first start with the Niners against the Bears at Soldier Field on Dec. 3, 2017.

On Sunday, Garoppolo will arrive in Chicago as Lance’s backup. He returned to practice last week after completing the necessary rehab on his surgically repaired right (throwing) shoulder.

Despite having only a few practices under his belt, Shanahan said Garoppolo will be ready to be the No. 2 behind Lance against the Bears.