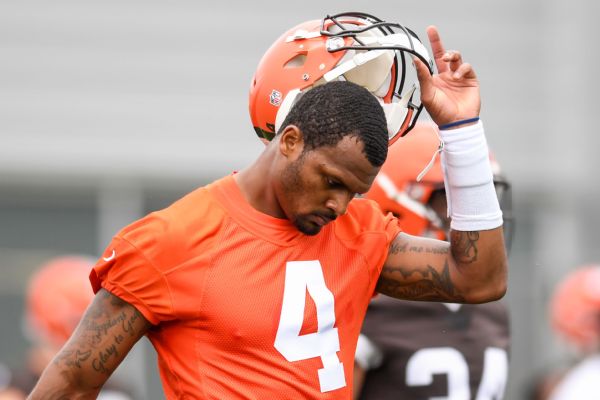 Watson can’t return to the facility or have contact with the Browns until Oct. 10, and can’t practice again until Nov. 14.

On Aug. 18, the NFL and the NFL Players Association reached a settlement on a suspension for Watson, who has been accused by more than two dozen women of sexual assault and sexual misconduct during massage sessions.

The Browns placed on Watson on the reserve/suspended list Tuesday, shortly before their afternoon practice. Watson was not on the field.

Coach Kevin Stefanski said that he met with Watson before the quarterback exited the facility prior to Tuesday’s 4 p.m. ET deadline.

“I think he has a really good plan,” Stefanski said. “Obviously, as you know, we can’t direct it. We can’t follow up with him. It’s really no contact with him until October 10. But I’m confident that he has a good plan to do some good work while he’s away.”

Stefanski wouldn’t say whether Watson will stay in Cleveland during the no-contact segment of the suspension, though did admit that Watson would leave town initially.

Stefanski noted that Watson will be working out with his personal quarterbacks coach, Quincy Avery.

“I think it’s a great opportunity for him right now while he’s away from this building to go work on football, work on himself, work on a bunch of different things,” Stefanski said.

Under the settlement, Watson was also fined $5 million and has to comply with mandatory treatment and counseling to be reinstated. Watson is eligible to play again in Week 13 against the Houston Texans, his former team. If he doesn’t comply with the treatment plan, his reinstatement could be delayed and he could be subject to further discipline.

Watson has continued to deny all wrongdoing, despite agreeing to the settlement and apologizing through a statement the team sent out immediately after the settlement was announced.

“Doesn’t mean that a person is guilty for anything,” he told reporters Aug. 18. “I feel like a person has an opportunity to stand on his innocence and prove that, and we proved that from a legal side, and just going to continue to push forward as an individual and as a person.”

Watson has been accused of sexual assault and other inappropriate conduct during massage therapy sessions in lawsuits filed by 25 women. One of the 25 lawsuits, one was dropped. Watson has settled or agreed to settle all but one of the remaining lawsuits, which remains pending. Two other women filed criminal complaints against Watson but did not sue him.

Two grand juries in Texas declined to pursue criminal charges against Watson earlier this year, but disciplinary officer Sue L. Robinson, jointly appointed by the NFL and NFLPA, concluded Watson violated the personal conduct policy with “egregious” and “predatory” behavior. She suspended Watson for six games, citing his “lack of expressed remorse” as an aggravating factor.

The NFL appealed Robinson’s six-game decision, though ultimately settled with the NFLPA despite calling for a season-long suspension.

The Browns traded for Watson in March, sending three first-round draft picks to the Texans. Cleveland then gave Watson a new five-year contract worth $230 million, the richest deal in NFL history for any player.

Quarterback Jacoby Brissett has been named Cleveland’s starter for the 11 games Watson is out.