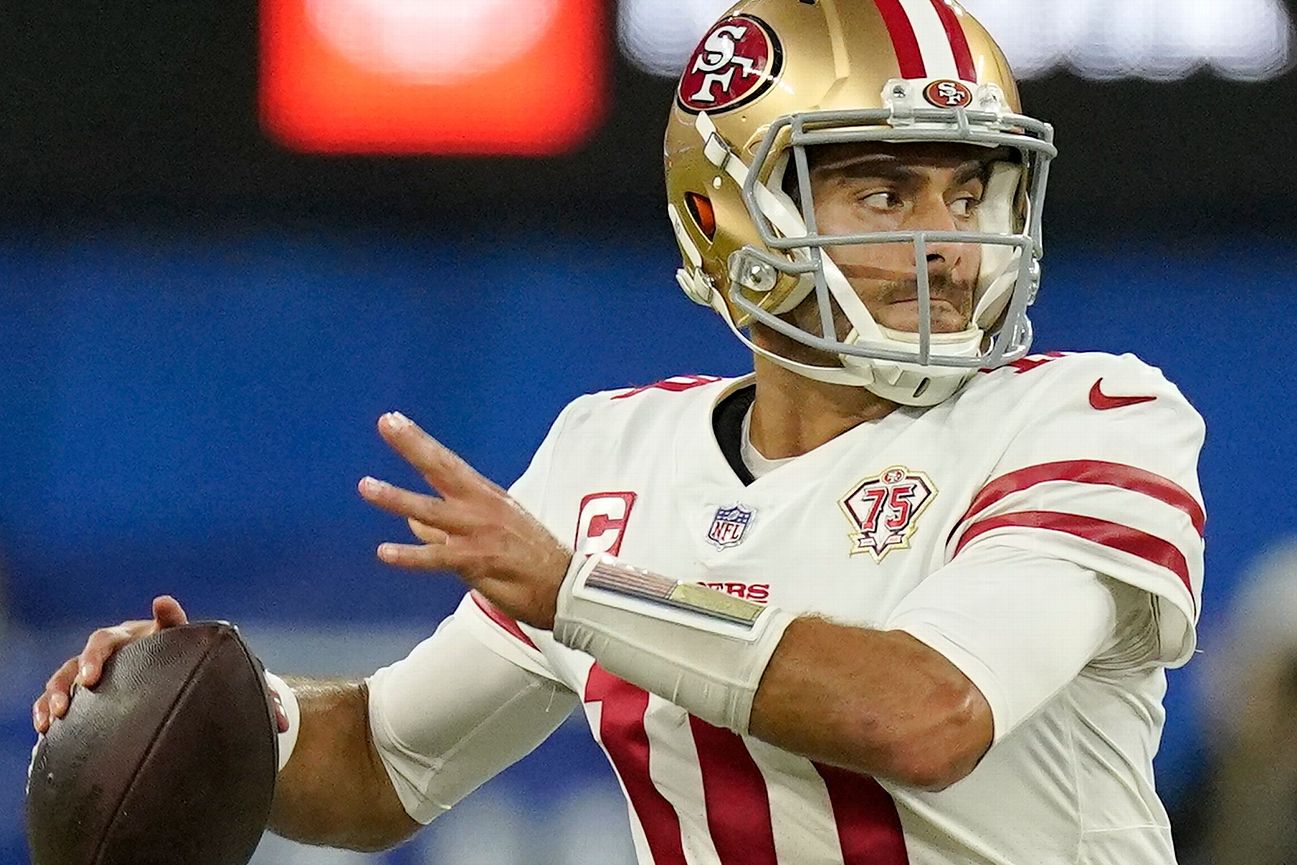 SANTA CLARA, Calif. — After an offseason in which a divorce seemed all but certain, the San Francisco 49ers and quarterback Jimmy Garoppolo are staying together for one more season.

Sources told ESPN’s Adam Schefter on Monday that Garoppolo and the Niners agreed to a restructured one-year contract that is worth $6.5 million in fully guaranteed base salary. The new-look deal contains another total of $500,000 in roster bonuses and playtime bonuses that could boost it by another nearly $9 million for up to a total of $16 million if all bonuses are reached.

Garoppolo’s restructured contract also includes a no-trade and no-tag clause that ensures Garoppolo will serve as the backup to Trey Lance this season and will then be able to explore unrestricted free agency in 2023.

A source told ESPN’s Jeremy Fowler that Garoppolo and the 49ers have discussed the option of waiving the no-trade clause if something develops and the 49ers can get compensation, but Garoppolo was willing to help the team and wanted to play again this season with his teammates.

Depending on how it’s structured, Garoppolo’s salary cap number for 2022 will end up being somewhere between $18 million to 19 million less than the $26.9 million it was previously slated to cost.

The idea of Garoppolo staying with the Niners became more of a possibility after an offseason and training camp in which the Niners were unable to find a trade partner for him. Garoppolo had right shoulder surgery in March, which made trading him nearly impossible, and by the time he resumed throwing in late June, most quarterback-needy teams had already gone a different direction.

When training camp opened on July 26, Garoppolo reported on time and passed his physical, but he did not participate in practice or attend meetings and hadn’t yet been issued a 49ers iPad with the playbook on it.

While the Niners practiced, Garoppolo spent his time on a side field continuing the prescribed throwing program for his shoulder rehabilitation.

Through it all, the Niners indicated that keeping Garoppolo at his previous cost was something they could do, even though it was always unlikely. But bringing him back at a reduced cost always seemed like a logical option if no trade could be completed.

On Aug. 23, Niners coach Kyle Shanahan again reiterated that no situation had been ruled out when it comes to Garoppolo.

Now, the Niners have one of the most expensive backup quarterbacks in the league but also one who knows the offense and has been under center for a trip to Super Bowl LIV and last year’s run to the NFC Championship Game.

That’s no small thing given the team’s lack of success with backup quarterbacks under Shanahan. The Niners were 1-1 in two Lance starts last year but he also dealt with thumb and knee injuries that hampered his rookie season.

In games started by quarterbacks other than Garoppolo since Shanahan’s arrival in 2017, the Niners are 8-28. They’re 35-16 with Garoppolo at the controls.

That .673 winning percentage was the fifth best of all starting quarterbacks in the NFL with at least 10 starts in that time. In 52 games with the Niners (including playoffs), Garoppolo has thrown for 12,124 yards (eighth most in franchise history) while completing 67.1% of his attempts (eighth in the NFL in that span) with an average of 8.33 yards per attempt (first in the NFL in that time among qualified starters).

Despite that success, Garoppolo has also struggled with injuries and interceptions. From 2018 to 2021, he missed 25 starts because of knee, ankle, calf and thumb injuries. His 44 interceptions since taking over as the starter near the end of 2017 is tied for 12th most in the league and his 1.59 touchdown to interception ratio ranks 32nd.

Through all of the offseason speculation, the Niners insisted they wouldn’t just part with Garoppolo for nothing. They also appreciated how he handled an odd situation in 2021.

Now, Garoppolo will be asked again to handle a potentially awkward situation with aplomb as he switches roles with Lance.

“I think Jimmy Garoppolo deserves a ton of credit because of the way he handled the situation,” general manager John Lynch said after the season. “The way not only he went about competing, competition brings out the best in everyone, it certainly did with Jimmy, but the way he also welcomed Trey and helped him along the way, it was a really nice thing to see. And I think it speaks volume to who he is.”